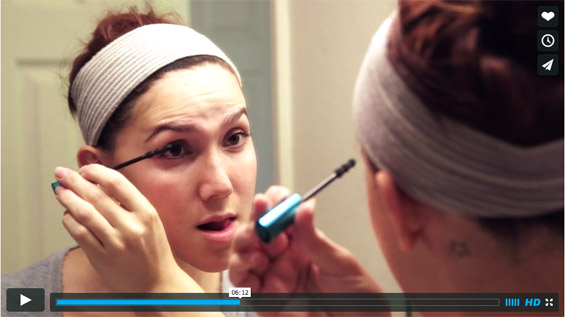 Torben Bernhard is the director behind Transmormon, a short documentary featuring Eri Hayward. Hayward, a Mormon, originally identified as a gay man before realizing she was, as she puts it, “a woman trapped in a man’s body.” I recently spoke with Bernhard about this project and what brought him to tell Eri and the Hayward family’s story.

First off, I’d like to ask about your work as a filmmaker. A brief survey shows me that you’re from Michigan, you go West to Utah (why Utah?) and have a few projects under your belt. What is it like to be a man-on-the-make in the entertainment industry and where do you see yourself expanding as an artist?

Yes, I am originally from Kalamazoo, MI. I moved to Louisiana mid-high school, but otherwise grew up in the Midwest. At 18, freshly graduated from an alternative high school and anxious to leave my job as a busboy at a local cajun restaurant, I moved to Utah to live near family and potentially start a $12 an hour construction job. Mostly, I was trying to change my life around and was looking for a fresh start.

Soon after moving, I started attending a local church and months later ended up on a Mormon mission in Thailand for two years. After completing my assignment, I headed back to Utah and have lived here on and off since.

Honestly, it’s amazing to even be thought of as a “man-on-the-make.” My goal, at this point, is two-fold: to improve with each piece and earn the permission from audiences to continue creating sustainably.  I recognize that requires both resources and support.

Transmormon is a wonderful piece of art. How did you find and get involved with the Hayward family and specifically Eri? What was it about this project that attracted you?

Thank you! That is really kind of you to say. I’ve been speaking with Eri recently about the possibility of a follow-up, but we are just waiting for the right time to pick back up.

I came to the project via our local NPR affiliate in Salt Lake City, KUER. They had recently started a collaborative video series called Videowest and invited me and my production team to contribute. While discussing potential projects, a blog interview featuring Eri that had been floating around Facebook came up. As soon as I read the interview, I knew I wanted to make this documentary.

In the interview, she talked about her experiences growing up, her faith, and a number of other topics we ended up exploring in the video. She was so candid and wise. She mentioned late into the interview that she was leaving to Thailand in days for Sex Reassignment Surgery, so we had a very small window to film. We came across the article on July 1st or so. By July 4th we were filming and by the 7th she was on a plane to Thailand.

I was primarily interested in their specific story, but also enticed by the opportunity to explore the tension between faith and, like Eri says in the movie, “allowing the picture to come into focus.” What if the picture that comes into focus jeopardizes your relationship with a religious organization that has loomed so large throughout your life? I found the Haywards story immediately compelling, because it naturally embodied tensions that provoke questions about spirituality, authenticity, and the struggle of believers trying to reconcile rifts between their faith and their immediate reality.

I think, as a documentarian, the best stories are the the ones that are already compelling before you show up. Your specific challenge is to translate them into your medium without losing their power in the process.

The film did an excellent job at respecting the faith of the Hayward family and I’ve found that filmmakers can sometimes go for the “cheap” shots which blame religion. What is the nature of your own spiritual life?

My own spiritual life has grown increasingly complicated. I tend to be more interested in questions than answers and that has posed some difficulty when it comes to my involvement with a particular faith. I’ve never said any of this publicly (and, in fact, I’ve been purposely ambiguous), but I struggled to hold onto my faith from the time I came home as a missionary for the Mormon church in Thailand. I remained going to church for years and made many efforts to hold on, but in the end, I’ve led a life relatively distant from any religious organization for about five years now. It’s very difficult. My family, on both sides, extend back to the Mormon pioneers and it was hard on everyone around me when I decided that it was no longer a good fit. It’s a very odd thing to feel alienated from something that so directly and dramatically changed my life. I still see myself as a naturally spiritual person, but I’m sure laying my beliefs on a table would reveal a semi-coherent mess.

I think my approach with Transmormon was directly influenced by my personal faith crisis. In trying to healthily integrate the mixed experiences of my past, I’ve wanted to move forward without anger, but also without tidy censorship. I think I employed some of the same lessons that have shaped my ongoing religious experience into the artistic approach of the documentary. I never felt like cheap shots had to be made while making this film, because the tensions were real and the juxtapositions stark enough to speak for themselves.

The way Eri appears here, she seems very relatable. I tend to feel like society is changing the more we see trans people in film and television (ex: Laverne Coz from Orange is the New Black, Andrea Prejic announcing her recent operation, etc). What are your thoughts on the public’s perception of trans people? Were you intentional at all about “softening” the edges of this story?

I think that there is still a tremendous amount of work that needs to be done to continue to inform the public’s perception of trans people, but I’ve also been very heartened by the steady increase of stories and information in the media. I do not think that I was intentional about “softening” the edges, but I do think that the Haywards have a relatable way of sharing their story that softens hearts. To sharpen the edges, I would have had to stray far from the nature of their family.

I should say, however, that I’d be interested in seeing a movie that took a more critical approach of some of the topics addressed in Transmormon. For this documentary, I just wanted to do justice to their specific story.

The second part of that last question brings me to the fact that there are changes taking place in Christianity right now to “allow” gays in the Church but trans people remain a rather divisive topic. The intersection of faith and sexuality can be problematic. How were you intentional, as a storyteller, about making sure both sides – faith and sexuality – were represented fairly?

Part of representing faith and sexuality fairly in Transmormon was first recognizing that they both played significant roles in the story and there needed to be space in the documentary to discuss both. I never saw the two dualistically, but instead part of a layered internal experience that took Eri years to fully unpack and understand. Her sexuality was real and the tension she felt regarding her religious devotion was as well.

The challenge for me was attempting to let both of these realities exist independently while illustrating that they meet in the body. The last interview I conducted with Eri, which is actually the last scene with her in the movie, was spent discussing this very intersection. I was so impressed and inspired by her final realization that she was giving her spirit what it needed.

Eri seems so confident and self-assured about who she is. What did you learn from Eri, and/or the Hayward family?

I learned a great deal from her entire family. I am impressed by Eri’s compassion and ability to forgive. I am inspired by her courage to be more authentic. Knowing how difficult it can be for so many children, I’m grateful for Ed and Keiko’s love and commitment to their daughter.

Was there anything that you noticed, capturing these moments, that didn’t make it into the film? What’s something you wished you were able to include?

There was a great section of our interview with Ed where he shared stories of some of his parenting regrets as they explored new territory as a family. He was very frank in discussing his mistakes and offering advice to other parents. One point in particular that has really stayed with me is when he told us how he used to unintentionally hurt Eri’s feelings by complimenting the person she was not. He related how, when you do not accept someone for who they really are, your praise hurts them because it only serves as a reminder that you love the person they are pretending to be. I think that is an important point for us all to remember.

What’s the next part of this project for you? Do you have any festivals lined up, are you still working on this, or have you moved on to a new film?

We’ve submitted to a number of festivals and screened at a few. We recently won an Artistic Vision Award at the Big Sky Documentary Film Festival. The film has now been viewed online over one million times and we hope to continue to share Eri’s story far and wide. We are always open to opportunities to spread Transmormon.

I am also working on a number of new projects, including a documentary about the battle over same-sex marriage in Utah and a short, personal documentary about my faith journey. Finally, I am currently working on an upcoming short documentary about a homeless man in Salt Lake City who aspires to change his circumstances by becoming a professional drummer. I’m trying to generally stay busy and release more and more material along with my team at OHO Media.

One thought on “Interview with Torben Bernhard”